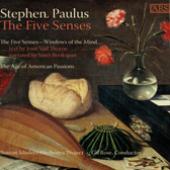 Admit it: You giggled when someone who certainly was no James Earl Jones whined out Peter and the Wolf or Copland’s A Lincoln Portrait with your local community orchestra. Even worse was the suffering through the uppity soprano who mangled Pierrot Lunaire while you were in music school. And don’t even get me started on the past-Weillian spoken chorus work in Blitzstein’s Regina.

The Boston Modern Orchestra Project (BMOP), under artistic director and conductor Gil Rose, is pleased to announce the release of the world premiere recording Stephen Paulus: The Five Senses, featuring Janet Bookspan, narrator, on Arsis Audio. This release marks the tenth CD from the Boston Modern Orchestra Project in less than three years. "BMOP's recordings have become an important part of the organization and it's very exciting to be releasing our tenth CD," comments Rose.