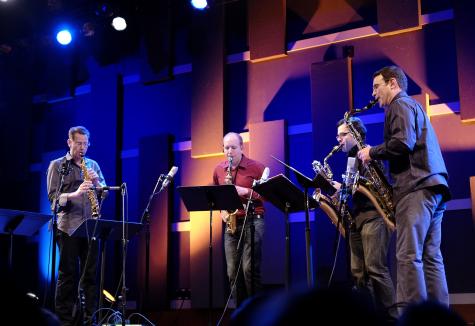 The PRISM Quartet, one of America’s foremost chamber ensembles, has been distinguished by intriguing programs of great beauty and breadth. “A bold ensemble that set the standard for contemporary-classical saxophone quartets” (The New York Times), PRISM has performed in Carnegie Hall on the Making Music Series, in Alice Tully Hall with the Chamber Music Society of Lincoln Center, and throughout Latin America, China, and Russia under the auspices of the United States Information Agency and USArtists International. PRISM has also been presented to critical acclaim as soloists with the Detroit Symphony and Cleveland Orchestra, and conducted residencies at the nation’s leading conservatories, including the Curtis Institute of Music and the Oberlin Conservatory. Two-time recipients of the Chamber Music America/ASCAP Award for Adventurous Programming, PRISM has commissioned over 250 works, many by internationally celebrated composers, including Pulitzer Prize-winners Julia Wolfe, William Bolcom, Jennifer Higdon, Zhou Long, and Bernard Rands, and MacArthur “Genius” Award recipients Bright Sheng and Miguel Zenón. PRISM’s discography includes releases on Albany, ECM, Innova, Koch, Naxos, New Dynamic, New Focus, and its own newly launched label, XAS Records. In 2016, PRISM was named by its alma mater, the University of Michigan, as the first recipient of the Christopher Kendall Award in recognition of its work in “collaboration, entrepreneurship, and community engagement.”

[Concert Review] Things that go BMOP in the night

If you attended a performance of the Boston Symphony Orchestra last fall, chances are pretty good that you heard one or more of Beethoven’s symphonies. The BSO, widely recognized as one of the world’s most elite orchestras, presented a complete set of these vaunted works throughout October and November and has several additional performances scattered throughout their concert season. My hometown orchestra, the New Haven Symphony Orchestra, dedicated this, their 116th season, to the theme “Beethoven and Beyond.” Their concerts are centered around a complete series of the nine symphonies.

The BMOP continued its season last Friday with their Band in Boston concert, celebrating 20th and 21st century music for wind ensemble with two repertoire mainstays by Stravinsky and Percy Grainger, as well as some newer compositions by Harold Meltzer, Wayne Peterson, and Joseph Schwantner. Robert Kirzinger’s excellent program notes make the case that band music has lost some of its historical prestige because the bands (military, university, etc.) have themselves lost their prestige, despite their ability, popularity, and cultural and social significance.

The Boston Modern Orchestra Project is known for exploring a wide variety of 20th- and 21st-century instrumental music. On January 22nd at New England Conservatory’s Jordan Hall, under the baton of music director Gil Rose, the group forayed into wind ensemble territory with a program of varying styles and with mixed effectiveness.

If you saw sparks flying over Boston’s Back Bay last night, it might have been the result of the energy and excitement generated by the Boston Modern Orchestra Project during their performance in Jordan Hall. BMOP’s primary mission is to commission, perform and record new orchestral work. They also perform 20th-century “classics” with great gusto.

Recoil proves that there is still creativity and talent to be found in the art music scene, and it is truly a shame that many orchestras are doing so little to seek it out.