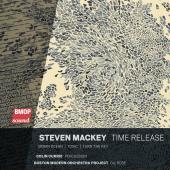 Return to the full catalog

Each piece in Steven Mackey’s album Time Release demonstrates his ability to incorporate varied and imaginative orchestral textures and gestures into a cohesive narrative. Mackey’s music has neo-romantic elements, comprising gestural melodic expression and dialectical forms.  He largely uses extended tonality with chromaticism. However, there are frequent non-diatonic and polytonal interjections that are vaguely reminiscent of Charles Ives’ music, as well as textural sections with disorienting pitch content. Notably, Mackey employs these extended tonal sonorities without sounding trite or cinematic.  The well-balanced and masterful orchestration of Mackey’s music is handled equally masterfully by the Boston Modern Orchestra Project’s performance of the work.

The latest volume of the Boston Modern Orchestra Project finds Gil Rose directing the orchestra for a selection of interesting and contrasting works by Steven Mackey (b 1956). It is entitled Time Release (BMOP 1068) after the 2005 work that is a centerpiece of the program.