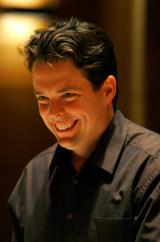 Andrew Clark is the Director of Choral Activities and Senior Lecturer on Music at Harvard University. He serves as the Music Director and Conductor of the Harvard Glee Club, the Radcliffe Choral Society, and the Harvard-Radcliffe Collegium Musicum and teaches courses in conducting and music theory in the Department of Music. He has lead Harvard’s Holden Choruses in performances at the Kennedy Center, cathedrals in Salzburg and Vienna, and throughout Germany and the United States. Professor Clark developed several Harvard residencies with distinguished conductors and ensembles, and conducted the Boston premiere of John Adams’ Pulitzer-Prize winning work, On the Transmigration of Souls with the composer present last spring. His first studio recording with the Holden Choruses, featuring the choral music of Ross Lee Finney, will be released in 2012.

Prior to his appointment at Harvard, Mr. Clark was Artistic Director of the Providence Singers, an award-winning choral arts organization, and served as Director of Choral Activities at Tufts University for seven years. He previously held conducting posts with the Worcester Chorus, Opera Boston, the Boston Pops Esplanade Chorus, and the Mendelssohn Choir of Pittsburgh, the chorus of the Pittsburgh Symphony.

A most uncommon acknowledgment of Good Friday recalling the crucifixion of Jesus Christ occurred at Jordan Hall. It involved the Boston Modern Orchestra Project, a slate of guest soloists, and the Harvard-Radcliffe Collegium Musicum. Two reenactments of the passion, one allegorical, by David Lang and the other, from Biblical texts, by Arvo Pärt, adopted a similar, now familiar musical language of minimalism. Both passions were fittingly in minor modes commonly associated with all things sorrowful.

It did not look much like a BMOP concert – only a few instrumentalists were present. But it was an appropriately grave lineup for the darkest day of the Christian calendar.

The Providence Singers continue their quest to bring forgotten choral works by American masters to the stage with a performance this weekend of Dominick Argento’s Jonah and the Whale, an eclectic concoction that blends fugues, hymns and sea chanteys with a text that spans many centuries. Performances at Blessed Sacrament Church on Academy Avenue are slated for tomorrow night and Sunday afternoon, as part of the ongoing FirstWorks Festival.

Their reenactment of Christianity's commemoration of the events leading to Christ’s death at Calvary was an all-engulfing, awe-inspiring expression of limpidness and mystic purity.