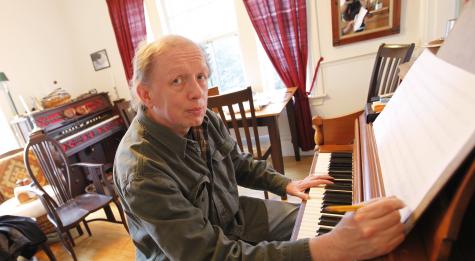 David Rakowski was born and raised in St. Albans, Vermont, where he played trombone in high school and community bands, and keyboards in a mediocre rock band called the Silver Finger. Early musical challenges included taking pop songs off the radio for his band to play. He was his high school class's valedictorian and its Best Thespian.

He received his musical training at New England Conservatory, Princeton, and Tanglewood, where he studied with Robert Ceely, John Heiss, Milton Babbitt, Paul Lansky, Peter Westergaard, and Luciano Berio. He spent the four years after graduate school not writing his dissertation, holding down dismal part-time word processing jobs and helping to run the Griffin Music Ensemble in Boston. At the end of those four years, he took a running leap into academia with a one-year appointment at Stanford University. Seven years later, he finished his dissertation.

Rakowski's most widely-performed music is his collection of one hundred highly varied and high-energy piano études; these pieces approach the idea of etude from many different angles, be they technical, conceptual, compositional, or stylistic; many of them may be viewed on YouTube. He is now at work on a set of piano préludes and has finished fifty-eight of a projected one hundred. He has also written six symphonies, nine concertos, three large wind ensemble pieces, a sizable collection of chamber and vocal music, as well as incidental music and music for children.

Rakowski's awards include the Rome Prize, the Arts and Letters Award from the American Academy of Arts and Letters, the 2006 Barlow Prize, and the 2004-6 Elise L. Stoeger Prize from the Chamber Music Society of Lincoln Center, as well as awards and fellowships from the Guggenheim Foundation, the NEA, the Rockefeller Foundation, the Tanglewood Music Center, BMI, Columbia University, the Orleans International Piano Competition (the Chevillion-Bonnaud composition prize), the International Horn Society, and various artist colonies. He is the only composer ever to be commissioned both by Speculum Musicæ and the "President's Own" U.S. Marine Band. He has also been commissioned by the Orpheus Chamber Orchestra, Sequitur, Network for New Music, Koussevitzky Music Foundation (with Ensemble 21 in 1996 and with Boston Modern Orchestra Project in 2006), Collage New Music, the Kaufman Center/Merkin Hall, Boston Musica Viva, the Fromm Foundation (twice), Dinosaur Annex, the Crosstown Ensemble, the Riverside Symphony, Parnassus, The Composers Ensemble, Alea II, Alea III, Triple Helix, and others. In 1999 his Persistent Memory, commissioned by Orpheus, was a finalist for the Pulitzer Prize in Music, and in 2002 his Ten of a Kind, commissioned by "The President's Own" U.S. Marine Band, was also a finalist for the Pulitzer Prize. He has been composer-in-residence at the Bowdoin Summer Music Festival, Guest Composer at the Wellesley Composers Conference, the Karel Husa Distinguished Professor of Music at the Ithaca College School of Music, the Maurice Abravanel Visiting Composer at the University of Utah, and a Master Artist at the Atlantic Center for the Arts; since 2011, he is composer-in-residence with the New England Philharmonic Orchestra. His music is published by C.F. Peters, is recorded on New World/CRI, Innova, Americus, Albany, Ravello, New Focus, ECM, Blue Griffin, Centaur, Capstone, BMOP/sound and Bridge, and has been performed worldwide. Pending CD releases include a fourth volume of piano études on Bridge, and a second orchestral CD on BMOP/sound. He also contributed a solo piano arrangement of "The Ladies Who Lunch" to the recently released Liaisons: Re-Imagining Sondheim from the Piano performed by Anthony de Mare on ECM Recordings. In 2016, he was elected to the American Academy of Arts and Letters.

After his year at Stanford, he taught at Columbia University for six years, and then skipped town, while laughing maniacally, to join the faculty of Brandeis University, where he is now the Walter W. Naumburg Professor of Composition. While at Brandeis, he has also taken part-time appointments teaching at Harvard University (twice) and New England Conservatory (also twice). Now a failed trombonist, he lives in Boston exurbia and in Maine with his wife Beth Wiemann and exactly two cats named Sunset and Camden.

It has become commonplace to bash the symphony orchestra. All together now: it’s impractical, old-fashioned, a relic, a museum, a bastion of canonic conservatism, a hangover from long-gone eras and aesthetics. We know the drill.

The “modern” in Boston Modern Orchestra Project varies in its meaning. Sometimes it refers broadly to music of the past several decades, such as its recent revivals of operas by Virgil Thomson and Michael Tippett. On Friday at Jordan Hall, though, its focus was on the other sense of the word: what’s happening right now. On the bill were three world premieres, all commissions from composers with local connections and associations with BMOP. This was, to my mind, the group at its vital, cutting-edge best.

Meanwhile the city’s other homegrown label, BMOP/sound, continues to impress. This scrappy in-house operation run by conductor Gil Rose and his Boston Modern Orchestra Project was launched early last year, and it has released a steady stream of impeccably produced, beautifully packaged discs with exacting and engaged performances of 20th- and 21st-century music. Several elegantly probing pieces by Brandeis-based composer David Rakowski were recently featured on a BMOP/sound disc called Winged Contraption, including his Piano Concerto in a strong performance by Marilyn Nonken.

Born in Vermont in 1958, David Rakowski is best known for his long series of witty, extravagant piano etudes. They have been often performed, and recordings of them have been praised by ARG’s reviewers: Bridge 9121 (July/Aug 2003), Albany 681 (Jan/Feb 2005), Bridge 9157 (Mar/Apr 2005). Rakowski has written much else, too, including three symphonies, five concertos, wind ensemble pieces, and chamber and vocal music.

About a year and half ago, we did a NewMusicBox cover on David Rakowski, in preparation for which I studied his then 80 solo piano etudes and became a hardcore devotee. These quirky pieces are a rare breed—they’re pithy and some are even hysterically funny, no small feat to accomplish in the abstract, non-representational medium of music. As a result, pianists flock to them, and they are fast becoming staples of the contemporary solo piano repertoire. But all through our talk, David insisted that he’s more than “the piano etude guy”.

BMOP/sound, the nation's foremost label launched by an orchestra and devoted exclusively to new music recordings, today announced the forthcoming album release of David Rakowski: Winged Contraption. Spanning 15 years of his musical career, Winged Contraption is a cornucopia of compositional treats that combines Rakowski's intellectual rigor, wit, and at times, pure silliness, while keeping its ears wide open to American music of all kinds.

Full review
[News Coverage] A record label of one's own

The news these days about the classical music recording industry is almost always bleak, so it’s a pleasure to report a bright spot on that landscape: the Boston Modern Orchestra Project has finally launched its own record label called BMOP/sound.

Now in its 10th season, the Boston Modern Orchestra Project is a vibrant presence on the city’s new music scene, a group with omnivorous musical appetites and impressive collective chops. Its calendar this season is crowded with contemporary music, from the avant-garde of France to the avant-garde of New Jersey. But once a year, BMOP tunes its questing ears to the music produced specifically by local composers, or at least those with local ties. The group’s annual “Boston Connection” program took place Saturday night in Jordan Hall.