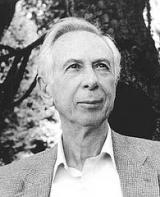 When George Rochberg was presented the Gold Medal of Achievement of the Brandeis University Creative Arts Award in 1985, the citation read in part: "We celebrate George Rochberg for his craft, poetry, and determination to melt the ice in contemporary music. . .Rochberg is a towering figure in American music. For over thirty years he has been a vibrant teacher and leading American composer - questioning, eloquent and deeply serious. . .His work reunites us with our musical heritage and provides a spiritual impetus to continue."

This recognition climaxed a long career during which Rochberg produced a large body of orchestral and chamber music, as well as works (including his opera, The Confidence Man) which emerged first from his involvement with atonal and serial music during the late '1940s, '50s and early '60s, and then from a gradual reassessment of, and ultimately a turn to, tonal music in the middle-late '1960s, '70s, and on into the '80s. It was this turn to a whole-hearted embrace of traditionally-oriented tonal possibilities which not only warmed up the musical climate but also opened the way to greater freedom and latitude in the way composers could express themselves. Rochberg may have been speaking for others as well as himself when he declared serialism "finished, hollow, meaningless. . ."

The storm center of this change of heart and mind came with the first performance and subsequent recording of his Third String Quartet - a work whose appeal, according to Donal Henahan of The New York Times, lay in its "unfailing formal rigor and old-fashioned musicality. Mr. Rochberg's quartet is - how did we use to put it? - beautiful."

Michael Walsh, then with the San Francisco Examiner, expressed the view that "Rochberg's Third Quartet may come to be seen as the work that defines the attitudes of a generation of composers. . .What is important about it was that it represented a way out of the maze. The defection of so prominent a serialist could not be ignored by all those young composers who were just developing their styles - composers who are now turning up on programs themselves."

Following the 1971 Third String Quartet, Rochberg produced new quartets, symphonies, and concertos which have added to his prominence in the concert hall. It is a body of work informed throughout by what Rochberg has called his "deep concern for the survival of music through a renewal of its humanly expressive qualities." International recognition has come to Rochberg through widespread performance of his works by leading orchestras, conductors and soloists. Many of his works have been recorded, and his music has been the subject of discussion in journals and magazines in America and abroad, most recently in Australia and China.

Beginning with the first performances of his Night Music in 1953 by the New York Philharmonic with Dimitri Mitropoulos conducting, other works have subsequently achieved major attention, notably the Symphony No. 2 with George Szell and the Cleveland Orchestra (1959 and 1961); the Violin Concerto, which Isaac Stern performed in America, England and France during the middle '1970s; the Oboe Concerto, commissioned for Joseph Robinson and performed by Zubin Mehta and the New York Philharmonic (1984); Symphony No. 5 premiered by Sir Georg Solti and the Chicago Symphony (1986); Symphony No. 6, with Lorin Maazel conducting the first performances with the Pittsburgh Symphony (1987); Concerto for Clarinet and Orchestra, commissioned for Anthony Gigliotti, principal clarinet, by Wolfgang Sawallisch and the Philadelphia Orchestra, and premiered in 1996.

Born in Paterson, New Jersey, on July 5, 1918, Rochberg began his studies in composition at the Mannes School of Music, and, after serving as an infantry lieutenant in World War II, resumed them again at the Curtis Institute of Music. He taught at the Curtis Institute from 1948 to 1954; and in 1960 he joined the faculty of the University of Pennsylvania, where he served as a chairman of the Department of Music until 1968. He retired from teaching in 1983 as Emeritus Annenberg Professor of the Humanities.

[Concert Review] Not at all Monsters of Modernism

Gil Rose, who has included Tufts University as one of the bases of his Boston Modern Orchestra Project, brought a group of nineteen of Boston’s best freelancers to Distler Hall on Sunday afternoon, January 30, for a program of vivid (and not at all monstrous) American works for small orchestra and chamber groups. BMOP gave the same program at Bowdoin College and Wellesley College before this well-seasoned wrap-up. The audience was smaller than it ought to have been, but the weather was certainly much to blame for that.

. . .Rose and company then dazzled with their go-for-the-gusto playing of the wall-shaking Sacred Song of Reconciliation by George Rochberg. Set to a Hebrew text, the music portrays the fearsome power of the Old Testament God. Bass-baritone David Kravitz conveyed that power in a performance of staggering impact.

Black Sounds, written for a ballet depicting the act of murder, is an unrelentingly intense work that packs a good deal of violence into its 17 minutes. George Rochberg thought of the piece as an “homage” to Varèse, and indeed with its stark, near-atonal language, repetitive phrases, and broad, colorful percussion array, it sounds a good deal like the French/American composer’s music, including its scoring for wind ensemble.

BMOP once again shows itself at the forefront of new music activities not only on Boston, but in America generally.