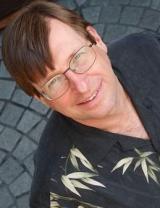 Stephen Hartke was born in Orange, New Jersey, in 1952, and grew up in Manhattan. Hailed by Paul Griffiths recently in the New York Times as one of America's "Young Lions," Hartke's music reflects the diversity of his musical background, from medieval and renaissance polyphony, of which he was

Stephen Hartke was born in Orange, New Jersey, in 1952, and grew up in Manhattan. Hailed by Paul Griffiths recently in the New York Times as one of America's "Young Lions," Hartke's music reflects the diversity of his musical background, from medieval and renaissance polyphony, of which he was
once quite an active performer, to very personal syntheses of diverse elements from non-Western and popular music. Since settling in California in the 80s, his music, both chamber and orchestral, has come to circulate widely. He has enjoyed commissions from such groups as the New York Philharmonic, the National Symphony Orchestra, the Koussevitzky Music Foundation, the Chamber Music Society of Lincoln Center, the National Endowment for the Arts, the Los Angeles Chamber Orchestra, the Fromm Music Foundation, Music from Angel Fire, Chamber Music America, the Hilliard Ensemble, and a recent grant from the Institute for American Music (based at the Eastman School of Music) to compose a full-length opera for Glimmerglass Opera. Orchestral performances include those by the New York Philharmonic, the Los Angeles Philharmonic, the London Symphony Orchestra, the BBC Philharmonic,the Moscow State Philharmonic, the Canadian National Arts Centre Orchestra, the St. Paul Chamber Orchestra, as well as the symphony orchestras of Baltimore, Des Moines, Detroit, Houston, Kansas City, Memphis, New Jersey, Phoenix, St. Louis and Utah. Hartke has received awards from the American Academy in Rome, the American Academy of Arts and Letters, the ASCAP Foundation, the Chamber Music Society of Lincoln Center, the Aaron Copland Fund, the Fulbright Senior Scholars Program, the Guggenheim Foundation, and Meet the Composer. Much of his music is available on CD on CRI, ECM New Series, EMI Classics, Naxos American Classics, and New World Records.

Stephen Hartke lives in Glendale, California, with his wife, Lisa Stidham, and young son, Sandy, and is Professor of Composition at the University of Southern California.

I was feeling a little, well, strung out this weekend (having seen both Itzhak Perlman and the Artemis String Quartet), so perhaps I simply wasn’t in the mood for “Strings Attached,” the latest concert by the Boston Modern Orchestra Project (last Saturday at Jordan Hall). Or then again, maybe the concert was simply as mixed a bag as it seemed. At any rate, it proved a rather rambling evening, with perhaps no very deep lows, but only one real high.

As the BMOP nears the close of its season, Boston lowbrow was treated to—in keeping with the “instrumental” theme of their programming this year—a concert of string music with the paronomastic title “Strings Attached.” Saturday night started with Stained Glass (2009), a brand new short and accessible piece by NEC grad student Nathan Ball—a smooth start to the night with its passages of shuddering violins and folky vibrato.

It was probably the touchy economy, in part, that inspired Gil Rose and the Boston Modern Orchestra Project to build concerts this season around subsections of the orchestra rather than the full group; on Saturday, it was works for strings. And the orchestra’s most homogeneous group, its lyricism and opulence self-reinforcing, made for pretty classy thrift.

The Boston Modern Orchestra Project (BMOP) presented its third full concert of the season at Jordan Hall on Saturday night, March 6, exclusively featuring the strings in an extensive, fairly eclectic program of music for string orchestra. The program, tagged “Strings Attached” was the counterpart to BMOP’s prior concert in January featuring music exclusively for winds. The pieces performed included two monuments of the 20th-century canon, Bartók’s Divertimento and Babbitt’s Correspondences for string orchestra and synthesized tape.

A strangely moving mix of wail and chant, the piece is a richly embroidered work indeed and Kashkashian made an electric connection with the audience.