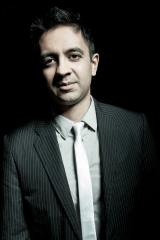 Grammy-nominated composer-pianist VIJAY IYER (pronounced “VID-jay EYE-yer”) was described by Pitchfork as “one of the most interesting and vital young pianists in jazz today,” by the Los Angeles Weekly as “a boundless and deeply important young star,” and by Minnesota Public Radio as “an American treasure.” He has been voted DownBeat Magazine’s Artist of the Year three times – in 2016, 2015 and 2012 – and Artist of the Year in Jazz Times’ Critics’ Poll and Readers’ Poll for 2017. Iyer was named Downbeat’s 2014 Pianist of the Year, a 2013 MacArthur Fellow, and a 2012 Doris Duke Performing Artist. In 2014 he began a permanent appointment as the Franklin D. and Florence Rosenblatt Professor of the Arts in the Department of Music at Harvard University.

The New York Times observes, “There’s probably no frame wide enough to encompass the creative output of the pianist Vijay Iyer.” Iyer has released twenty-two albums covering remarkably diverse terrain, most recently for the ECM label. The latest of those is Far From Over (2017), the first from the Vijay Iyer Sextet. The record was ranked #1 in US National Public Radio’s annual Jazz Critics’ Poll, surveying 157 critics. It was named among the best jazz albums of the year in the Los Angeles Times, Chicago Tribune, Boston Globe, Slate, and The New York Times, and the only “jazz release” in Rolling Stone’s list of the 50 best records of 2017. Iyer’s Sextet was subsequently voted 2018 Jazz Group of the Year by the Jazz Journalists Association.

Iyer’s previous ECM releasees include A Cosmic Rhythm With Each Stroke (2016), a collaboration with Iyer’s “hero, friend and teacher,” Wadada Leo Smith, which the Los Angeles Times calls “haunting, meditative and transportive”; Break Stuff (2015), with a coveted five-star rating in DownBeat Magazine, featuring the Vijay Iyer Trio, hailed by PopMatters as “the best band in jazz”; Mutations (2014), featuring Iyer’s music for piano, string quartet and electronics, which “extends and deepens his range… showing a delicate, shimmering, translucent side of his playing” (Chicago Tribune); and Radhe Radhe: Rites of Holi (2014), “his most challenging and impressive work, the scintillating score to a compelling film by Prashant Bhargava” (DownBeat), performed by International Contemporary Ensemble and released on DVD and BluRay.

Iyer’s trio (Iyer, piano; Marcus Gilmore, drums; Stephan Crump, bass) made its name with three tremendously acclaimed and influential albums: Break Stuff (mentioned above), Accelerando (2012) and Historicity (2009). Accelerando was voted #1 Jazz Album of the Year for 2012 in three separate critics polls surveying hundreds of critics worldwide, hosted by DownBeat, Jazz Times, and Rhapsody, respectively, and also was chosen as jazz album of the year by NPR, the Los Angeles Times, PopMatters, and Amazon.com. The Vijay Iyer Trio was named 2015 Jazz Group of the year in the DownBeat International Critics Poll, with Iyer having earlier received an unprecedented “quintuple crown” in the 2012 Downbeat Poll (winning Jazz Artist of the Year, Pianist of the Year, Jazz Album of the Year, Jazz Group of the Year, and Rising Star Composer categories), as well as a “quadruple crown” in the JazzTimes extended critics poll (winning Artist of the Year, Acoustic/Mainstream Group of the Year, Pianist of the Year, and Album of the Year). Iyer received the 2012 and 2013 Pianist of the Year Awards and the 2010 Musician of the Year Award from the Jazz Journalists Association, and the 2013 ECHO Award (the “German Grammy”) for best international pianist. Historicity was a 2010 Grammy Nominee for Best Instrumental Jazz Album, and was named #1 Jazz Album of 2009 in The New York Times, The Los Angeles Times, the Chicago Tribune, the Detroit Metro Times, National Public Radio, PopMatters.com, the Village Voice Jazz Critics Poll, and the Downbeat International Critics Poll, and the trio won the 2010 ECHO Award for best international ensemble.

Iyer’s 2013 collaboration with poet Mike Ladd, Holding It Down: The Veterans’ Dreams Project, based on the dreams of veterans of color from America’s wars in Iraq and Afghanistan, was hailed as #1 Jazz Album of the Year by the Los Angeles Times and described in JazzTimes as “impassioned, haunting, [and] affecting.” Along with their previous projects In What Language? (2004) and Still Life with Commentator (2007), Holding It Down rounded out a trilogy of politically searing albums about post-9/11 American life. These projects were hailed as “unfailingly imaginative and significant” (JazzTimes) and praised for their “powerful narrative invention and ravishing trance-jazz… an eloquent tribute to the stubborn, regenerative powers of the human spirit” (Rolling Stone).

Iyer’s accomplishments extend well beyond his recordings. His recent composer commissions include “Torque” (2018) written for So Percussion; “Asunder” (2017) written for Orpheus Chamber Orchestra and St. Paul Chamber Orchestra; “Trouble” (2017) for Violin and Orchestra, written for Jennifer Koh and premiered at Ojai and Tanglewood Music Festivals; “City of Sand” (2017) for A Far Cry plus members of Silk Road Ensemble; “Run,” a solo cello overture to Bach’s Suite in C Major, written for Matt Haimovitz and recorded on his Overtures to Bach (2015); “Bridgetower Fantasy” (2014) for violin and piano, a companion piece to Beethoven’s “Kreutzer” Sonata, written for Ms. Koh and Shai Wosner; “Playlist for an Extreme Occasion” (2012) written for Silk Road Ensemble (and released on their 2013 album A Playlist without Borders); “Dig The Say,” written for Brooklyn Rider and released on their 2014 album Almanac; “Mozart Effects” (2011) and “Time, Place, Action” (2014) for Brentano String Quartet; “Bruits” (2014) for Imani Winds and pianist Cory Smythe; “Rimpa Transcriptions” (2012) written for Bang on a Can All-Stars; “UnEasy” (2011) commissioned by NYC’s Summerstage in collaboration with choreographer Karole Armitage; “Three Fragments” (2011) for Darcy James Argue’s Secret Society. His orchestral work Interventions was commissioned and premiered by the American Composers Orchestra in 2007 under the baton of Dennis Russell Davies. It was praised by The New York Times as “all spiky and sonorous,” and by the Philadelphia City Paper for its “heft and dramatic vision and a daring sense of soundscape.” Other works include Mutations I-X (2005) commissioned and premiered by the string quartet ETHEL; “Three Episodes for Wind Quintet” (1999) written for Imani Winds; a “ravishing” (Variety) score for the original theater/dance work Betrothed (2007); the award-winning film score for Teza (2008) by legendary filmmaker Haile Gerima; a suite of acoustic jazz cues for the sports channel ESPN (2009); and the prize-winning audiovisual installation Release (2010) in collaboration with filmmaker Bill Morrison. Forthcoming commissions include pieces for Jennifer Koh, Orpheus Chamber Orchestra, and So Percussion. His concert works are published by Schott Music. An active electronic musician and producer, Iyer displays his digital audio artistry on his own recordings Still Life with Commentator, Holding it Down, Mutations, and Radhe Radhe, and in his remixes for British Asian electronica pioneer Talvin Singh, Islamic punk band The Kominas, and composer-performer Meredith Monk.

Iyer was voted the 2010 Musician of the Year by the Jazz Journalists Association, and named one of 2011’s “50 Most Influential Global Indians” by GQ India. Other honors include the Greenfield Prize, the Alpert Award in the Arts, the New York Foundation for the Arts Fellowship, the India Abroad Publisher’s Special Award for Excellence, and numerous critics’ prizes.

A polymath whose career has spanned the sciences, the humanities, and the arts, Iyer received an interdisciplinary Ph.D. in the cognitive science of music from the University of California, Berkeley. He has published in Journal of Consciousness Studies, Wire, Music Perception, JazzTimes, Journal of the Society for American Music, Critical Studies in Improvisation, in the anthologies Arcana IV, Sound Unbound, Uptown Conversation, The Best Writing on Mathematics: 2010, and The Oxford Handbook of Critical Improvisation Studies. Prior to his permanent appointment at Harvard in 2014, Iyer taught at Manhattan School of Music, New York University, and the New School. He is the Director of The Banff Centre’s International Workshop in Jazz and Creative Music, an annual 3-week program in Alberta, Canada. Iyer has served as Director of the International Workshop in Jazz and Creative Music at The Banff Centre since 2013. He has been featured as Artist-in-Residence at the Metropolitan Museum of Art (New York), Wigmore Hall (London), the Molde Jazz Festival (Molde, Norway), SF Jazz, and Jazz Middelheim (Antwerp, Belgium), and served as Music Director for the 2017 Ojai Music Festival in southern California. He is a Steinway artist and uses Ableton Live software.