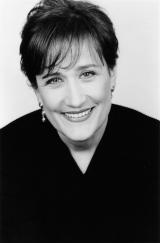 The only artist to receive the International Walter W. Naumburg Award twice, as a soloist and as a chamber musician, soprano Lucy Shelton has performed repertoire from Bach to Boulez in major recital, chamber and orchestral venues throughout the world.

Since her return to the USA from England in 1997, Ms. Shelton has had five recordings released on Deutsche Grammophon and KOCH International with repertoire of Carter, Stravinsky, Crawford Seeger, and Messiaen. Five additional CD's are in the works, with repertoire of Del Tredici, Rands, Adolphe, Kim, and Carter. She also has recordings on Bridge Records, Unicorn-Kanchana and Virgin Classics with music of Goehr, Knussen, and Schoenberg.

A native Californian, Ms. Shelton's musical training began early with the study of both piano and flute. After graduating from Pomona College she pursued singing at the New England Conservatory and at the Aspen Music School where she studied with Jan de Gaetani. Shelton has taught at the Cleveland Institute of Music, New England Conservatory, and the Eastman School. She is currently on the faculty of the Tanglewood Music Center and coaches privately at her studio in New York City.

"In the forefront was Lucy Shelton, a new-music diva if there ever was one, performing with fire, sensitivity, astounding surety of pitch, and what seemed like love abounding." (The Boston Globe, May 2001)

In this program’s balance of modern alongside old, we learn that Druckman knows how to manage foreground and background. Druckman was also alert to his place in history. It instills his music with confidence. In the notes, La Folia contributor Dan Albertson identifies similarities to Lutosławski’s orchestration and language. Dutilleux, another master of transparency across multiple layers, came to mind. That Quickening Pulse provides a feisty concert opener with dissonant fanfares.

About a year ago, Arsis put a big advertising push behind a CD called Songs of Love that featured the music of Bernard Rands (b. 1934) and that of his wife, Augusta Read Thomas. I kind of blew hot and cold over that disc, but not this time. This is the real deal, a three-part work made up of what amounts to three independent song cycles, one for each of the vocalists, accompanied by either orchestra or, as here, a large chamber ensemble that is one of the most striking works I can recall hearing and one that only grows in my estimation each time I listen to it.

The Boston Modern Orchestra Project (BMOP), under Artistic Director and Conductor Gil Rose, is pleased to announce the Arsis Audio release of the world premiere recording of the complete Canti Trilogy by renowned composer Bernard Rands. This is the eighth commercial recording BMOP has released in the last two years. The ensemble is one of the few professional orchestras in the country dedicated exclusively to performing and recording music of the 20th and 21st centuries.

Shelton is excellent in Lamia.