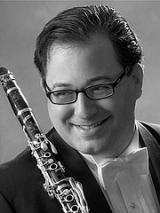 Mr. Norsworthy's current season is highlighted by return performances on the Composer Portraits Series at New York's Miller Theatre for the music of Wolfgang Rihm and Gerald Barry, performances of music by Boulez and Felder on the Fromm Concerts in Boston, performances of Helmut Lachenmann's music with the composer, concerts of music by Milton Babbitt and James Tenney at Merkin Hall in New York, the world premiere of a new work by Hans Tutschku, the world premiere of a new double clarinet concerto by Ezra Sims with the Boston Modern Orchestra Project, recitals in Boston and Michigan, and a five city Midwestern tour of Noel Zahler's Clarinet Concerto.

A dedicated and persuasive champion of the music of our own time, Mr. Norsworthy has given premieres of over 100 works in collaboration with composers Milton Babbitt, Harrison Birtwistle, Elliott Carter, Chris Dench, Pozzi Escot, Brian Ferneyhough, Michael Finnissy, Lukas Foss, Hans Werner Henze, Magnus Lindberg, Ralph Shapey, and Marc Anthony Turnage, among many others.

Mr. Norsworthy holds advanced degrees from New England Conservatory and Southern Illinois University at Carbondale, and has attended Michigan State University. His teachers included Elsa Ludewig-Verdehr, Eric Mandat, Kalmen Opperman, and Richard Stoltzman. He is co-director of the Sound Encounters Festival at the New England Conservatory, is currently artist in residence at Harvard University with the Harvard Group for New Music, and serves on the faculties of The Boston Conservatory and Columbia University.

Michael Norsworthy plays exclusively on Buffet Clarinets and Rico Reserve reeds. He is a performing artist for Buffet Crampon, the Parisian firm that is the world's oldest and most distinguished clarinet maker and Rico International, the world's largest and most popular manufacturer of reeds.

Say hello to Hans Tutschku before the concert, and he will direct you to the "sweet spot" of the room. This past weekend was Tutschku's second "festival" of the year, where space and technology would share the limelight. Last fall, he curated "Sound in Space Festival: The Art of Interpretation of Electro-acoustic Music" at the Fenway Center in Boston. This spring, Tutschku was curator of a two-day festival "Jour, Contre-jour" with the Fromm Players at Harvard, held in the university's John Knowles Paine Concert Hall Friday night and last night.

Friday’s wide-ranging Boston Modern Orchestra Project concert demonstrated how unhelpfully vague the umbrella term “modern music” can be. Some New England Conservatory link was the only correspondence among the disparate works, gathered under the title “Boston ConNECtion” (and performed under Jordan Hall’s architecturally ill-mannered “New England Conservatory” signboard, which continues to intrude on the season’s concert experience like a dinner-time telemarketer).

BMOP has become so popular, you have to look hard in the program to find its full name: Boston Modern Orchestra Project. Founder Gil Rose and his outstanding ensemble celebrated their 10th season at the New England Conservatory on Friday with their annual concert devoted to Boston composers. An enthusiastic and diverse audience (diverse especially in age) cheered, whistled, and hooted its approval for pieces, including two world premieres, by five composers also diverse in age. All the pieces were lively and (unlike Gerontius) fun.

Of the four works I heard, it was Lucier's extremely lean piece for clarinet and slow-sweep pure-wave oscillator that hit home technologically and spatially in Paine Hall.