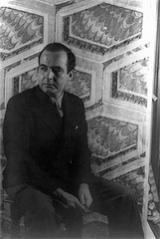 Samuel Barber's music, masterfully crafted and built on romantic structures and sensibilities, is at once lyrical, rhythmically complex, and harmonically rich. Born 9 March 1910 in West Chester, Pennsylvania, Barber wrote his first piece at age 7 and attempted his first opera at age 10. At the age of 14 he entered the Curtis Institute, where he studied voice, piano, and composition. Later, he studied conducting with Fritz Reiner.

Samuel Barber's music, masterfully crafted and built on romantic structures and sensibilities, is at once lyrical, rhythmically complex, and harmonically rich. Born 9 March 1910 in West Chester, Pennsylvania, Barber wrote his first piece at age 7 and attempted his first opera at age 10. At the age of 14 he entered the Curtis Institute, where he studied voice, piano, and composition. Later, he studied conducting with Fritz Reiner.

At Curtis, Barber met Gian Carlo Menotti with whom he would form a lifelong personal and professional relationship. Menotti supplied libretti for Barber's operas Vanessa (for which Barber won the Pulitzer) and A Hand of Bridge. Barber's music was championed by a remarkable range of renowned artists, musicians, and conductors including Vladimir Horowitz, John Browning, Martha Graham, Arturo Toscanini, Dmitri Mitropoulos, Jennie Tourel, and Eleanor Steber. His Antony and Cleopatra was commissioned to open the new Metropolitan Opera House at Lincoln Center in 1966.

Barber was the recipient of numerous awards and prizes including the American Prix de Rome, two Pulitzers, and election to the American Academy of Arts and Letters. His intensely lyrical Adagio for Strings has become one of the most recognizable and beloved compositions, both in concerts and films (Platoon, The Elephant Man, El Norte, Lorenzo's Oil)

The Boston Modern Orchestra Project had a good idea last weekend. They paired with the Florestan Project, a superb vocal group, to present three days of concerts named “Voice of America” at Tufts University’s Distler Performance Hall. Florestan presented the complete songs of Samuel Barber, some 75 in number. The Sunday afternoon concert I attended then featured a chamber-music-sized BMOP with concerted songs of Samuel Barber and Virgil Thomson. Florestan and BMOP together offered a sublime tribute to the voice.

Samuel Barber (near left, with his lover Gian Carlo Menotti) once described himself as “a living dead composer,” and indeed, for most his life his commitment to romantic feeling in the modern age consigned him to the dustbin of critical opinion. But history has a way of upending that dustbin, and Barber’s gift for lyrical simplicity, cemented in the popular mind by his Adagio for Strings, has enabled him to outlast his detractors.

The conductor Gil Rose, after curating last year’s Ditson Festival of Contemporary Music, is admirably keeping alive the vision of a local new-music festival in late September. This year’s iteration, entitled “Voice of America,” is underway at Tufts University’s Granoff Music Center. It does not have the Ditson Fund’s generous backing so it paints on a necessarily smaller canvas, but last night’s opening performances made clear that it should be a richly rewarding weekend of American vocal music.

This evening’s double concert in the Distler Performance Hall of Tufts’ Granoff Music Center began a 3-day festival involving a partnership between the Florestan Recital Project and the Boston Modern Orchestra Project to highlight American vocal music. The former’s presentation was the 1st of 3 concerts which together would span the entire vocal opus of Samuel Barber, aptly titled, “BarberFest,” while the latter highlights contemporary compositions for vocalist(s) and chamber orchestra.

September is usually the quietest month of the year for local classical music, with the summer activity largely vanished and the fall tumult yet to descend. Last year was an exception, with the Alice M. Ditson Fund throwing a big new-music party for most of the established local ensembles over four days at the Institute of Contemporary Art. As groups collaborated and programmed on a broader canvas, the festival energized the local scene, and many musical insiders hoped it could become a fall tradition.

No one can forget the last song's "ah, to be all alone."